Today’s blog is an educational visit to the McDonald Observatory in Texas courtesy of Robyn Clark and her husband Bob.

(click on any thumbnail to view the full-sized image)

The road up the Davis Mountains to the McDonald Observatory– the minions and my husband Bob decided to pull over for a photo op. Minion Stan was eying a lizard on the ledge where they were sitting, and Bob was afraid he was going to run after it. Minion Earl Grey was behaving himself… but I could see he was plotting to pounce on the lizard as well… gotta keep an eye on the Earl, he is a bit more sneaky…

The minions enjoying the view of the Davis Mountains, on their way up to the McDonald Observatory. 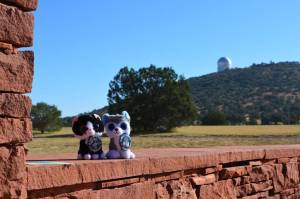 The minions checking out the huge Harlan J. Smith Telescope. This thing is so big, my husband Bob had to hold them up just to try to get them and part of the telescope in the photo! This telescope is called the 2.72 meter telescope because the diameter of the primary mirror is 2.72 meters across. This thing is MASSIVE and the little minions were a little nervous to be under it!

The minions in front of the Otto Struve Telescope, which was built in 1938 and was the observatory’s very first telescope. It has been updated extensively and is still in use today.

Here is another photo of the minions in front of the Otto Struve Telescope.

The little minions are a bit hard to see in the photo, but they are sitting on the concrete posts on either side of the sign. This is on top of Mount Locke, with the Harlan J. Smith and Otto Struve telescopes behind me. Mount Locke is not the highest point in Texas, but, as the sign says, it is the highest point reached on Texas highways. 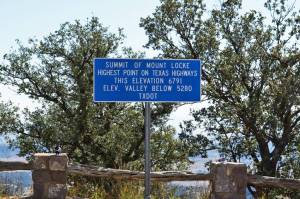 The little minions had a great time visiting the McDonald Observatory and even went to a Star Party that night and got to look through the telescopes at the Rebecca Gale Telescope Park there at the observatory. Of course these are not as large as the research telescopes, but they are still huge! Obviously I could not take photos of that because it was too dark, but the minions say that if you are ever in west Texas, make a trip to the McDonald Observatory. It is a long drive but well worth it!

Thank you Robyn Clark, husband Bob and Minions Stan and Earl for a fascinating tour of the McDonald Observatory!