Earl Grey’s Body Double has been out and about in the Calgary area. 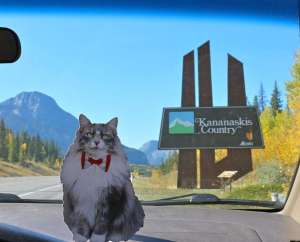 At first following in Tuxedo Albert’s footsteps with brief excursions to Banff and Kananskis Country, Earl Grey was excited to learn that the MEOW Foundation in Calgary has managed to acquire a new building for its rescue facility, and was quite keen to visit.  Debbie Nelson, the Executive Director, was happy to let us in and give us a tour. 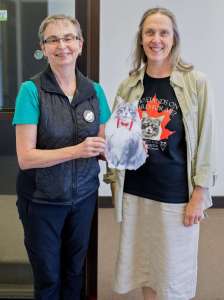 It is quite empty yet, apart from some basic furniture and a cat tree, but there are big plans!

Big plans take big money, so yet more fundraising is in the works.  We made a substantial donation, but kept Earl’s nose clean as we wouldn’t want any whiff of a scandal. 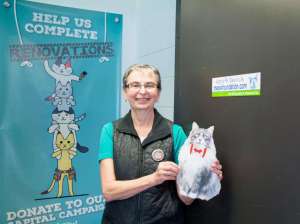 We toured the new building, which is quite large.  It is an industrial building in an industrial area, which is apparently what zoning regulations require.  The cats are presently housed in a small bungalow, and taken out to present at adoption events.  The new place would have its own rooms for that and other things such as offices, meeting rooms, etc.  It is quite ambitious, and we hope they can raise enough money in a reasonable time.

We loved the old director’s chair, probably one of a kind, and Earl liked it too  🙂 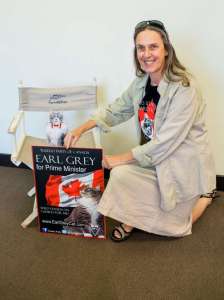 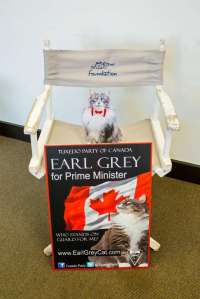 Well, the big empty building and all the plans and dreams were very impressive, but Earl felt he should meet a few of his constituents, so off we went to the little house.

I thought I was first with the kissing babies comment, but apparently not……

Earl Grey met all kinds of cats at the refuge, some he connected with more than others!

He realises now that this is going to be hard work, especially with all the fund-raising, but he is dedicated to the cause and will fight on to the end!
(then have a long and well-deserved nap  🙂  )

Much best wishes,
Diana, Earl Grey and all the staff

You can visit the MEOW Foundation website by clicking HERE.

Want to participate in Earl Grey’s Body Double adventures? Pick one up in our ONLINE STORE and take photos of Earl in your home town. We will post them in our Election Album for everyone to see.