Skip to content
Remember 1 year ago when a group of dedicated Spay Day Volunteers took on a mission to rescue a colony of cats that was in jeopardy as the humans on the island where they lived were being relocated? Here’s an update from one of their new caregivers in Nova Scotia…
“This might be a fitting time for another update on our two Little Bay Islands boys who now live in Hall’s Harbour, N.S.” 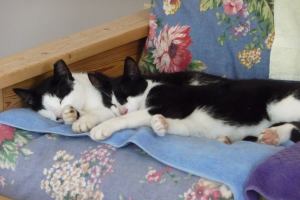 “Clifford and Winkle have been with us for nearly a year already! Thankfully, they now appear content staying more or less within the boundaries of our property, after a few overly-enthusiastic explorations which included crossing the road (!) and visiting neighbours a few doors away, and deciding to not return home overnight twice and not until 3 a.m. on another occasion – my nerves!!”

“They have become very accustomed to us working around outside, and as long as we don’t directly approach them, they don’t go far while we are doing all sorts of noisy yard work, and on many occasions they actually sit and watch what we are doing. Both of them are also far less skittish around me in their cat house. Now when I put their food dishes down, both cats are right at my feet, I have to push my way past them to get to the tray where I place their dishes. Both cats usually purr incredibly loudly as food is being served, and Winkle will rub against my legs as both cats twirl back and forth behind me as I dish up the food offerings! Even Clifford will brush against me now, and he often will sit kneading his paws while waiting for food. And both cats will make lengthy eye contact with me; Winkle has actually looked right at me and meowed several times when he either wants to go out or is wondering where Clifford is. I don’t think of them as ferals now, they are more like outdoor pets who have their own house and staff. I’m hoping that they are starting to consider me to be a big, but friendly, kitty!”
“Even this time of year they go outside every day, but for shorter periods; usually they come inside several times to warm up and have a snack. I notice that they now spend their afternoon naps up in the loft, rather than out in the forest as they did all summer. However, they won’t be housebound all winter, because even in the worst winter weather, they will be quite sheltered out in the catio, and their housekeeper will keep some pathways shovelled for them if the snow is deep!” 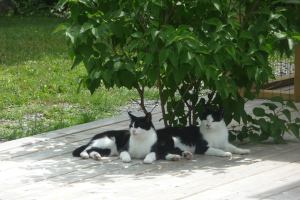 “They still love each other to pieces! We often see one appear on the deck, looking around and meowing for the other. And when the other appears, it’s an exuberant “Oh Winkie, I missed you so much!!”, rub rub, nudge nudge, and “Oh Cliffie, I’m so happy to see you again!!”, tail twirl, head licking, rub rub, flopping-down display. They still do just about everything together, although they are now confident enough to often go off in different directions once they have done the morning perimeter checks. They usually return together to the cat house throughout the day, though, marching across the deck in perfect step, tails straight up, jostling each other through the cat door!”

“Winkle has decided he’d like to learn to drive. This summer we caught him twice sitting in our car, since we leave the windows down in hot weather, and he appeared miffed that we wanted to drive away without him. I just hope we never forget to take the keys into the house!” 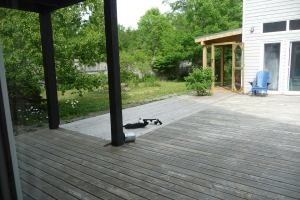 “Watching these two resilient boys becoming comfortable with their surroundings and taking possession of their territory is such a pleasure; they make us laugh nearly every day, and we are captivated by how much they adore each other. Again, we are so grateful to everyone who made the rescue of the Little Bay Islands cats possible; if only all feral cats could be so lucky!”

Just goes to show you that not everything about 2020 was bad.